When high-definition TVs became the norm, manufacturers developed a shorthand to explain their display resolution. The most common numbers you will see are 720p, 1080p and 1080i. As we’ve seen, the “p” and “i” tell you whether it’s a progressive-scan or interlaced-scan display. And these shorthand numbers are sometimes used to describe computer monitors as well, even though in general a monitor is capable of a higher-definition display than a TV. The number always refers to the number of horizontal lines on the display. 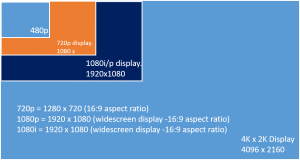